SEOUL, June 4 (Yonhap) -- The number of non-Korean nationals eligible to vote in the June 13 local elections surpassed the 100,000 mark for the first time, the election watchdog said Monday.

The number reached 106,205, more than double the 48,428 recorded for the 2014 local elections, according to the National Election Commission (NEC). They will make up 0.25 percent of the total eligible voters of 42.9 million.

The country began to allow foreigners to vote for quadrennial local elections in 2006.

Foreigners who are over age 19 and have had permanent residence for more than three years are entitled to cast ballots in local elections if they are on a provincial government's foreigner registration ledger.

A total of 4,028 officials, including 17 metropolitan mayors and provincial governors, will be chosen in the upcoming elections. Parliamentary by-elections in 12 districts will be also held together with the local elections for the first time.

The NEC said it will cost 1.07 trillion won (US$998 million) to hold the June elections.

The country will open 3,512 poll stations nationwide for early voting on Friday and Saturday. A total of 14,134 polling centers will open next Wednesday, it added. 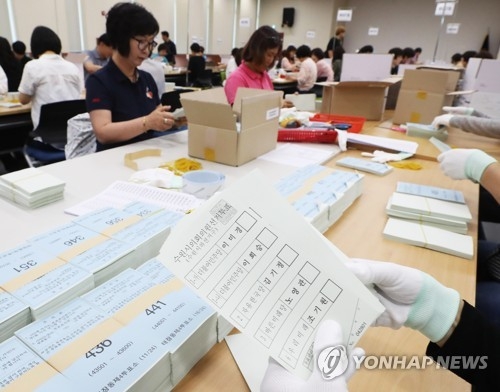 Over 100,000 non-Korean nationals eligible to vote in local elections

Over 100,000 non-Korean nationals eligible to vote in local elections