In a bilateral summit held at Moon's presidential office Cheong Wa Dae in Seoul, the two leaders also agreed to work together to peacefully rid North Korea of its nuclear ambition.

"President Moon Jae-in expressed gratitude to President Duterte for his active support for our government's efforts to peacefully resolve the North Korean nuclear issue and establish permanent peace on the Korean Peninsula," Cheong Wa Dae said in a press release.

Duterte arrived here Sunday for an official visit that will end Tuesday. 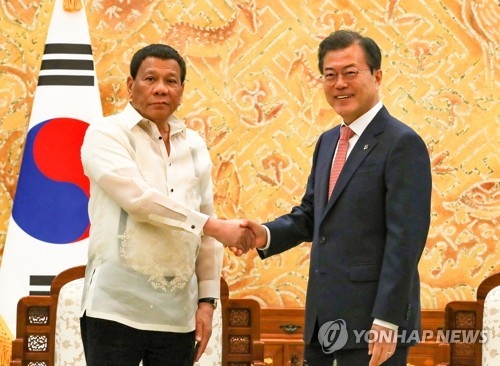 The New South Policy is one of Moon's key international initiatives, under which Seoul seeks to greatly improve its ties with all 10 member states of the Association of Southeast Asian Nations, including the Philippines.

To this end, Seoul has agreed to expand its economic development cooperation fund (EDCF) to the Philippines to US$1 billion, according to Cheong Wa Dae.

"The two leaders welcomed our country's decision to expand its EDCF for the Philippines to $1 billion and agreed to further develop the countries' cooperation in the transportation-infrastructure, energy, water management and ICT sectors," it said.

To further promote exchange of people between the two countries, the leaders agreed to designate 2019 a visit South Korea-Philippines year, marking the 70th anniversary of the establishment of the countries' diplomatic ties.

Moon and Duterte also promised better police protection for their people in each others' countries.

"While expressing satisfaction over the close cooperation between the police authorities of the two countries, President Duterte promised the continued interest of the Filipino government to better protect our citizens in the Philippines," the press release said.

"President Moon highly praised such efforts by the Philippines and said his country too will continue its efforts to protect and support Filipino workers and residents in South Korea."