SEOUL, June 4 (Yonhap) -- The defense chiefs of South Korea and Vietnam held talks in Hanoi on Monday to discuss security on the Korean Peninsula and cooperation in the defense industry, Seoul officials said.

During the talks, Song explained to Lich the results of the inter-Korean summits on April 27 and May 26.

He also noted Seoul's efforts to ensure that the upcoming summit between U.S. President Donald Trump and North Korean leader Kim Jong-un would help achieve the denuclearization of the peninsula. Trump and Kim are set to meet in Singapore on June 12.

Lich voiced his support for the April inter-Korean summit declaration and took note of Seoul's endeavors to improve inter-Korean ties and build a solid peace regime on the peninsula, Song's office said.

Song also called on the Vietnamese minister to expand bilateral cooperation in the defense industry.

On the occasion of the ministerial meeting, the two sides inked a bilateral arrangement on logistical support. 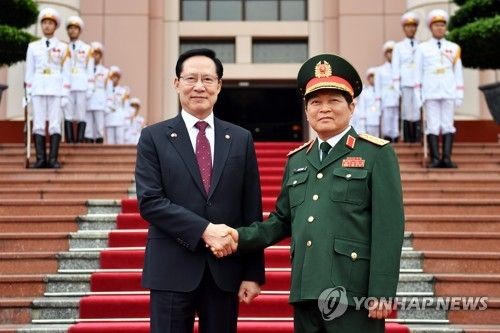