SEOUL, June 4 (Yonhap) -- The son of a South Korean taxi driver who gained fame last year after being portrayed in a movie on the Gwangju Democratic Movement in 1980 asked prosecutors on Monday to investigate a conservative commentator who insisted North Korean troops were behind the uprising.

Kim Seung-pil, son of the late Kim Sa-bok, the real-life cabbie portrayed in the movie "A Taxi Driver" as a supporter of late German journalist Jurgen Hinzpeter, who hired Kim to drive him to Gwangju for his on-the-ground coverage of the pro-democracy uprising, said he has taken the legal action after Jee Man-won, an outspoken rightist, made factually incorrect claims against his late father and the German national.

In a recent Internet post, the 76-year-old Jee said Hinzpeter and Kim Sa-bok were both North Korean agents who participated in a plot to instigate the uprising in Gwangju in 1980. Jee also insisted that around 600 special North Korean troops acted as instigators in Gwangju and were later given rewards from the Pyongyang regime. 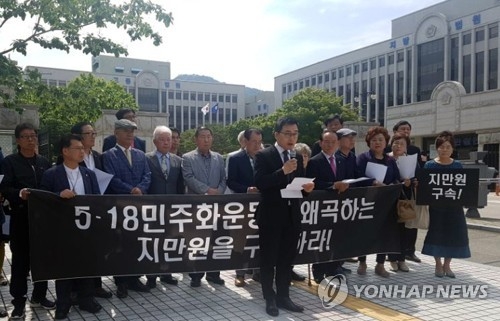 "A Taxi Driver" was a huge box-office success, drawing more than 10 million viewers in South Korea.

Helped by Kim Sa-bok, named Man-seop in the film, Hinzpeter became the first western reporter to send out footage of the bloodshed during the crackdown on the democratic movement.

In his written petition filed with the Gwangju District Prosecutors' Office, Kim Seung-pil said that the South Korean and U.S. governments have officially confirmed rumors of North Korean infiltration into Gwangju as baseless.

Nevertheless, Kim said, Jee's false and illegal posts and photos have been spreading online. "Prosecutors should not stand idle over such illegalities," said Kim, who visited the prosecutors' office together with a Gwangju citizen who was also mentioned by Jee as a North Korean agent.

Jee is already a defendant in five other libel suits filed over his claim that North Korean forces took part in the Gwangju uprising.