The Korea Football Association (KFA) said it confirmed South Korea's shirt numbers for the 2018 FIFA World Cup as it submitted the final 23-man roster to FIFA. South Korea are in World Cup Group F with Sweden, Mexico and Germany. 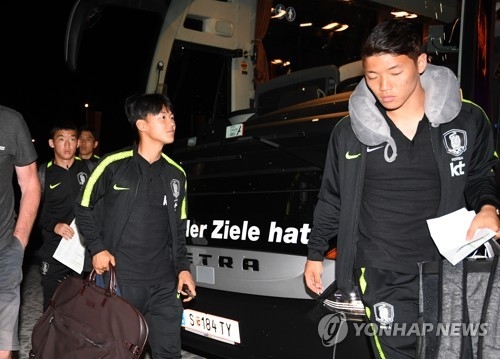 Most South Korean players received the numbers that they have been using for the national team. South Korean attacking ace Son Heung-min, who is with Tottenham Hotspur in the English Premier League, will wear the No. 7 shirt, while team captain Ki Sung-yueng will don the No. 16 jersey.

South Korea's youngest player, Lee Seung-woo, was given the No. 10 jersey. The 20-year-old attacker, who plays with Hellas Verona in Italy, used the same number when he played for the under-20 national team.

Red Bull Salzburg forward Hwang Hee-chan will sport the No. 11 jersey, while Jeonbuk Hyundai Motors' towering striker Kim Shin-wook will suit up with the No. 9 shirt.

South Korean goalkeeper Kim Seung-gyu, who is expected to start in goal, will wear No. 1.

The following are South Korea's shirt numbers for the 2018 World Cup: