Mattis spoke to reporters en route home from a security conference in Singapore, where the two leaders are set to meet next Tuesday to discuss the dismantlement of North Korea's nuclear weapons program.

The defense secretary said North Korea was a topic in almost all of his meetings in Singapore.

"It was a surprising commonality about, you know, a complete, verifiable, irreversible, removal of WMD, of nuclear weapons and WMD," he said Sunday, referring to weapons of mass destruction. "The hopes are riding with the diplomats, no surprise." 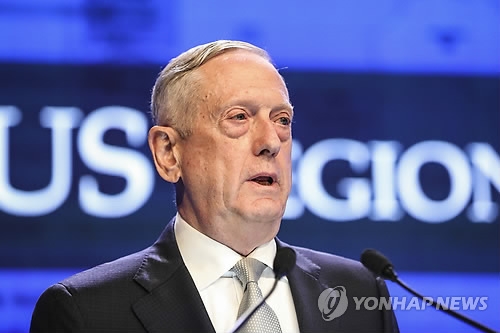 North Korea has sought security guarantees for its regime in exchange for denuclearization, a condition that could include the drawing down of the 28,500 American troops stationed in the South.

Mattis ruled that out as a subject of discussion.

A day earlier Mattis said the issue of the U.S. troops won't be on the negotiating table at the June 12 summit, "nor should it be."

"I really don't know where this stuff comes from," he told reporters on the plane. "I get asked it every time in the Pentagon press room. I just decided it's just something that's going to be out there. I mean, it's truly never even come up. Once someone's made it up, however, apparently it gets a life of its own. Someone picks it up, and someone else said so, too. No, it never comes up."