Lee is the youngest of 23 South Korean players currently training in Leogang, Austria, for their World Cup tune-up. The 20-year-old had no senior national team experience, but surprisingly made South Korea's provisional World Cup squad last month. The Hellas Verona player then went on to nail a spot on the final roster for the World Cup in Russia, where South Korea will face Sweden, Mexico and Germany in Group F.

"When you're a national team member, it's obvious to compete with do-or-die mantra," Lee said before the national team's training at Steinbergstadion here. "With that mindset, I'll also try to do perform well." 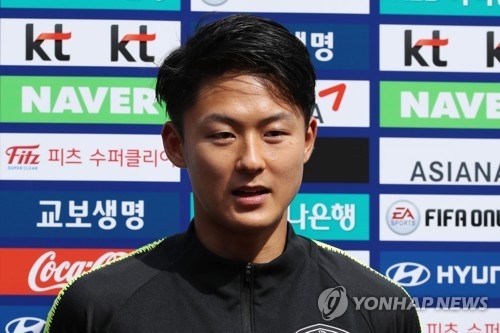 Lee, a youth product of FC Barcelona, will wear the No. 10 jersey for South Korea during the World Cup. He said playing with the No. 10 shirt, usually given to the ace of the team, doesn't make him special.

"It's true that I became more confident after receiving this important No. 10 jersey," he said. "But it doesn't mean that my role or attitude will be different. I'll just work hard like I have been doing."

Lee said he is excited about his first World Cup.

"Of course, I'm happy and excited because I get to achieve my childhood dream," he said. "But I'll first calm myself down and will make thorough preparations for the World Cup."

Lee said he understands why his seniors, like Son Heung-min and team captain Ki Sung-yueng, had some harsh words for the team after their 3-1 defeat to Bosnia and Herzegovina in a friendly match at home on Friday.

"We didn't win in our last home friendly (before the World Cup send-off), and I thought it was natural for them to make some comments like that," he said. "I know the national team isn't an easy place to compete, so I'll have responsibility and play hard."

(World Cup) With No. 10 jersey, young midfielder vows to compete with 'do-or-die mantra'

(World Cup) With No. 10 jersey, young midfielder vows to compete with 'do-or-die mantra'