In announcing the time of the historic summit, White House press secretary Sarah Sanders said logistical preparations are being finalized by an advance team in Singapore.

She also said a separate U.S. delegation led by Amb. Sung Kim has had "very positive" diplomatic negotiations with North Korean officials at the Demilitarized Zone straddling the two Koreas.

"Significant progress has been made," she said at a regular news briefing. 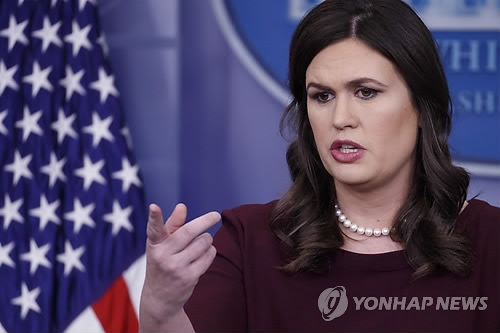 The on-again, off-again meeting was reinstated Friday after Trump met with a senior North Korean official at the White House. Kim Yong-chol, vice chairman of the central committee of North Korea's ruling Workers' Party, delivered a letter from Kim Jong-un.

Sanders quoted the president as saying the letter was "interesting" but refused to discuss specifics. She also said Trump has been receiving daily briefings on North Korea from his national security team.

Trump has said his goal is to get rid of North Korea's nuclear weapons. But in recent comments he has played down expectations the issue will be settled in one meeting.

North Korea has called for a step-by-step approach through which it would get security guarantees and economic benefits in return.

Sanders maintained that the U.S. has not abandoned its "maximum pressure" policy on North Korea, remarks that came after Trump distanced himself from the term citing improving ties between the countries.

"Our policy hasn't changed," she said. "And as the president stated, we have sanctions on. They're very powerful, and we would not take those sanctions off unless North Korea denuclearized."

"Our focus is on the president's meeting with Kim Jong-un, and the president will make his views known directly to him when we're in Singapore," she said. "And our focus will continue to be on denuclearization."