Kim made the biggest leap among those in the top 50, after losing to Ariya Jutanugarn on the fourth playoff hole at the oldest major championship in women's golf over the weekend.

Kim rallied from a seven-shot deficit with nine holes to play to force a playoff with Jutanugarn, who finished regulation with back-to-back bogeys. Kim had a birdie on the first hole in the two-hole aggregate playoff but gave back a shot with a bogey on the next hole. The two went to sudden death, and Jutanugarn beat Kim with a par on the second sudden death hole.

Jutanugarn, who now has two major titles, climbed three spots to No. 2, right behind South Korea's Park In-bee. Park has been No. 1 since April 23.

Park is one of five South Koreans in the top 10. Park Sung-hyun slipped a spot to No. 5, one place ahead of Ryu So-yeon. Kim In-kyung trails them at No. 7.

And Korean tour rookie Choi Hye-jin rose one spot to No. 10. 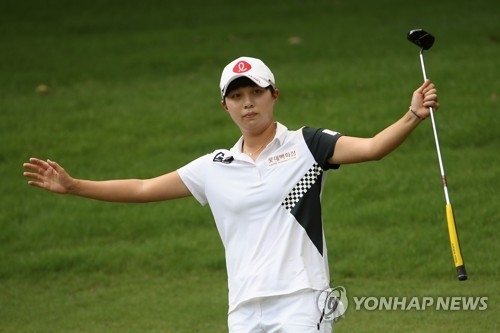