SEOUL, June 5 (Yonhap) -- South Korea's current account surplus contracted to a six-year low in April due to a decrease in the goods account and a sharp rise in dividend payouts, but a turnaround in Chinese visitors helped narrow the deficit in the service sector, central bank data showed Tuesday.

The country's current account surplus came to US$1.77 billion in April, down from a surplus of $3.67 billion a year ago, according to the preliminary data from the Bank of Korea (BOK).

From a month earlier, the April figure also lost ground from $5.18 billion tallied in March.

It marked the 74th consecutive month of a current account surplus, which started in March 2012.

The goods account surplus declined to $10.36 billion in April from $11.54 billion a year earlier due to a rapid gain in imports amid rising oil prices. In April, South Korea's exports retreated in April for the first time in 18 months.

The services account deficit fell to $1.98 billion from a deficit of $2.42 billion a year earlier as the number of foreign arrivals jumped 23.8 percent on-year to 1.33 million in April.

In particular, the number of Chinese visitors soared 60.9 percent on-year thanks to the Beijing government's lifting of a travel ban on South Korea-bound group tours.

The number of departures rose 11.3 percent to 2.23 million over the cited period.

The primary income account, however, saw its deficit widen to a record $5.86 billion in April from a loss of $4.92 billion a year earlier, due to an expansion in dividend payouts.

The goods account surplus reached $34.27 billion in the January-April period, down from $38.85 billion, while the service account deficit edged down to $11.39 billion from $11.08 billion. 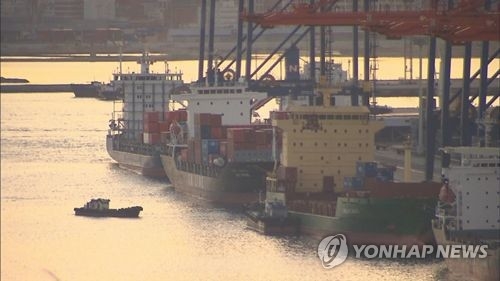