South Korea remained at the top of the standings as the eight countries to compete at the UL International Crown were finalized Tuesday, following the conclusion of the U.S. Women's Open over the weekend.

The 2018 UL International Crown will be the third edition of the biennial event and will take place at Jack Nicklaus Golf Club Korea in Incheon, 40 kilometers west of Seoul -- the first time it'll be played outside the United States.

The team standings were determined by the world ranking positions of the top four players from each country. Trailing South Korea were the United States, Japan, England, Australia, Thailand, Sweden and Taiwan.

The eight countries will be represented by four golfers each, for a field of 32. And these 32 players, along with the final country seeding, will be set based on the rankings as of July 2, following the KPMG Women's PGA Championship

Of those four, Ryu has played in both of the first two International Crowns, and Park In-bee and Kim were Ryu's teammates in the 2016 event. Park Sung-hyun, who shared the LPGA Player of the Year award with Ryu last year, will try to make her first International Crown team.

South Korea tied Japan for third place at the inaugural International Crown in 2014 and then finished runner-up to the United States at the second event in 2016.

"It's really cool to see that South Korea is currently the No. 1 nation again; we had the No. 1 spot in 2016," Ryu told the competition's website. "It's even more cool when we have the tournament in Korea, but there's going to be a lot of pressure on our shoulders as well. Hopefully, it will finish with a really cool storyline, with the No. 1 seed going on to win the Crown."

Pak Se-ri, a South Korean golf legend and World Golf Hall of Famer, is serving as an honorary executive director for the tournament. She's largely credited with inspiring generations of golfers in her native country, and Park In-bee, an LPGA Hall of Famer and a seven-time major champion, is among those inspired by Pak to pick up golf. 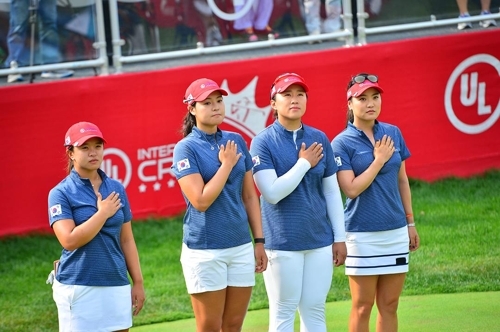