Data compiled by the local steel industry and the Korea International Trade Association (KITA) indicated that South Korean steel products were penalized with anti-dumping and countervailing duties, as well as import safeguards. The 95 cases account for nearly half of the 202 import restrictions for all South Korean exports. 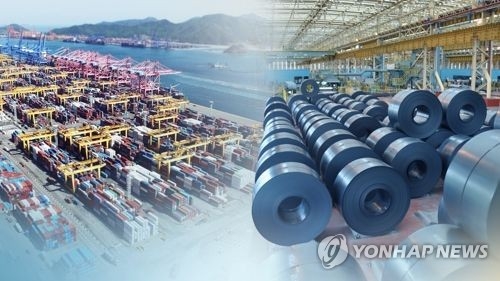 Twenty-eight of the restrictions on steel imports are in the United States. Canada had 11, Thailand eight, India seven, Malaysia six and Australia five. There are also cases with the European Union, Indonesia, Taiwan, Mexico, Vietnam, Brazil, South Africa and Saudi Arabia. This year alone, there have been six new cases.

Je Hyun-jung, who oversees trade support at KITA, said trade protectionism in the steel sector is due to the particular difficulty in restructuring the industry because it is a key and a process industry for any country.

"On top of that, there is an excess supply from newly emerging economies like China making heavy investments when the steel industry was at a peak from the early 2000s up until the global financial crisis," Je said. "Until this problem is resolved, global trade protectionism cannot but continue."
(END)