SEOUL, June 5 (Yonhap) -- The Cabinet endorsed a revision to the minimum wage act Tuesday despite strong protests from labor groups that the law offsets the effect of a rise in the legal wage threshold by including bonuses and benefits into its calculation.

Labor groups have urged President Moon Jae-in to veto the legislation, which passed through the National Assembly last week, as it calls for counting in some regular bonuses and welfare allowances when calculating the minimum wage.

South Korea raised the hourly minimum wage by 16.4 percent to 7,530 won in January, the biggest hike in nearly two decades and plans to increase the threshold to 10,000 won by 2020. Counting bonuses and other benefits in minimum wage calculations was one of the demands of the business sector.

Prime Minister Lee said the revision was aimed at lessening the burden of small business owners while at the same time guaranteeing the minimum wage of low-income workers. Lee, however, acknowledged that the revision could offset the effects of a raise.

"It is a reality that the effect of a minimum wage rise could be reduced in the case of some low-income workers. This is a task the government has to address," he said while presiding over the Cabinet meeting. "The labor and finance ministry should figure out the actual situation on the ground and come up with supplementary measures."

After last week's passage of the bill, the country's two umbrella labor organizations -- the Federation of Korean Trade Unions and the Korean Confederation of Trade Unions -- have walked away from a government commission on the minimum wage in protest.

The commission is charged with coming up with minimum wage levels through three-way discussions between labor, management and government. The two labor groups' decision to boycott the commission could lead to the suspension of a discussion on determining the minimum wage for next year. 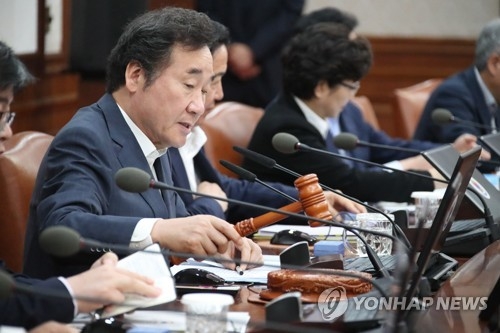