LEOGANG, Austria, June 5 (Yonhap) -- Football players burn a lot of energy and recovery nutrition is a critical part of their regimen. So, what do South Korea's national footballers snack on during or after training?

It turns out that bananas are the main snack that the players are eating while training for the 2018 FIFA World Cup.

South Korea kicked off their training with final 23 players in Leogang, Austria, on Monday, to fine-tune their preparations for the World Cup in Russia, where they face Sweden, Mexico and Germany in Group F.

In their first training, all South Korean players were seen eating bananas while resting on the bench.

A Korea Football Association (KFA) official said the organization decided to provide bananas to the players for efficient energy recovery after their workout. To help South Korean players perform well at the World Cup, the KFA has also sent a 23-member supporting staff that includes chefs and medical experts.

"Magnesium loss can lead to muscle spasms and bananas can help replenish magnesium and reduce hunger pangs," a KFA official said. "For these reasons, we've always prepared bananas when we train or play a match."

Athletes are often spotted eating bananas during their games. For South Koreans, that most noticeably occured when the women's national curling team skip Kim Eun-jung ate bananas during the 2018 PyeongChang Winter Olympics.

The KFA said it will continue supplying bananas to the national team until its World Cup journey is over. South Korea are set to move to their World Cup base camp in Saint Petersburg, Russia next Tuesday, six days ahead of their first Group F match against Sweden. After playing against Mexico on June 23, South Korea will wrap up their group stage campaign with Germany on June 27.

"For this World Cup, we'll keep providing bananas to our players in training and matches," the official said. 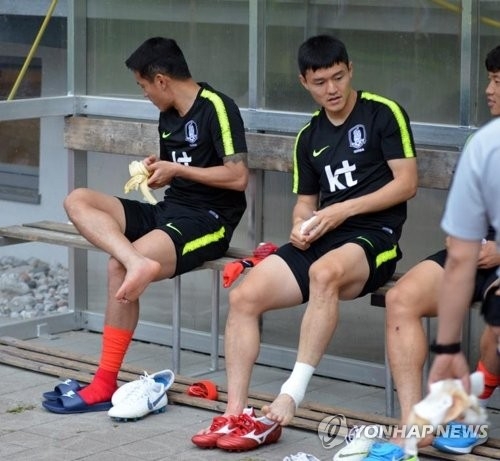