SEOUL, June 5 (Yonhap) -- Girls are twice as prone to smartphone addiction than boys, likely because they use more social networking and messaging services, according to research results released Tuesday.

The conclusions of a study team from Ewha Womans University in Seoul were that students who were female, consumed alcohol, had lower academic performance, did not feel refreshed in the morning and went to sleep after midnight were at a significantly higher risk of smartphone addiction. The results were based on research involving 1,796 adolescents -- 820 boys and 976 girls -- aged 14.9 on average. The study was published in the Journal of Paediatrics and Child Health.

The risk of addiction for girls was 23.9 percent, compared to 15.1 percent for boys. The odd ratio suggested that the risk of smartphone addiction in female students was double that of boys, while the risk for students who drink alcohol was 1.7 times higher than for those who do not. 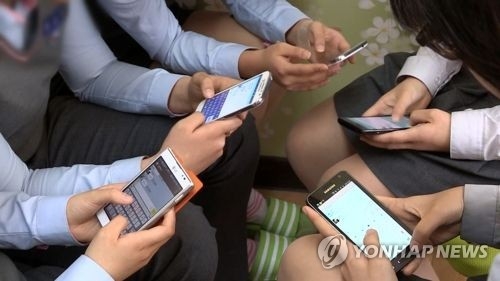 Smartphone addiction and duration of sleep at night also showed a correlation, according to the study. Some 40.4 percent of adolescents in the high-risk group slept six hours or less at night, compared to 28.3 percent in the low-risk group. Those categorized as high risk said they did not feel refreshed in the morning and that it took them longer to fall asleep.

"The quality of sleep in adolescence affects growth, emotional stability and learning skills," the study said. "Therefore, the management of smartphone addiction seems to be essential for proper sleeping habits. There is a critical need to develop a means of preventing smartphone addiction on a social level."
(END)