LEOGANG, Austria, June 5 (Yonhap) -- South Korean captain Ki Sung-yueng is one of the players who know what it feels like to fail at the World Cup. And he apparently has some words of advice to his teammates.

After finishing their first training at their pre-World Cup camp in Leogang, Austria, on Monday, the national players gathered in a circle with no coaches present. Ki reportedly told his teammates to get the right mindset for the 2018 FIFA World Cup in Russia, where they have to face Sweden, Mexico and Germany in Group F.

Ki, who is with Swansea City in the English Premier League, was seen speaking to his teammates for about seven minutes. FC Augsburg Koo Ja-cheol was next to deliver some words of advice.

The player meeting took 15 minutes, triple the length of time head coach Shin Tae-yong spoke to his players after training.

"I just told our players about our mindset preparing for this World Cup," Ki said of the players' gathering. 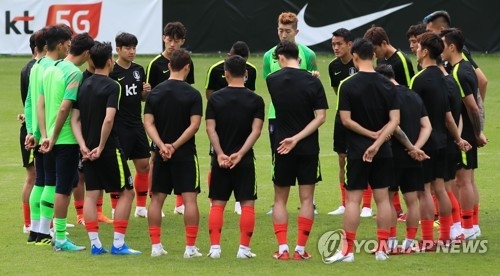 A Korea Football Association (KFA) official said Ki emphasized the urgency and importance of the World Cup to the players who are less experienced in the national team.

"I heard that Ki expressed his thoughts to new national team members who might lack a sense of urgency going to the Russia World Cup," he said. "Ki suffered failure at the World Cup in Brazil and now as the team captain, he appears to be feeling more responsibility and that apparently led to a long meeting."

Ki is the only player on South Korea's 23-man squad who has played in two previous World Cups. With 100 caps, he is also the most experienced South Korean player in international football.

In 2014, Ki experienced South Korea's early exit at the World Cup with one draw and two losses. South Korea played to a 1-1 draw with Russia in their opening match, but lost 4-2 to Algeria and fell 1-0 to Belgium.