SEOUL, June 5 (Yonhap) -- BTS' recent success on the Billboard charts and its music awards mark a major step forward for the K-pop industry, Billboard said Tuesday, attributing the Korean boy band's success to efforts to challenge the conventions of the global music industry.

"The key to BTS' success lies with their musicality, which is definitely different from previous K-pop singers," the U.S. music chart operator said in a written interview with Yonhap News Agency that was interpreted by its Korean branch.

"The appeal of BTS' music comes from its symbolism and implications," which led to a body of different literary and philosophical interpretations of BTS songs by YouTubers, the company noted.

Many critics have pointed to the consumptive, derivative music styles and characters of K-pop idol groups. But the recent success of BTS, which includes having twice won the Billboard Award in the Top Social Artist category, has brought the K-pop industry one step further, according to the interview.

"The American show business market is worth US$17.2 billion, the biggest in the world and 20 times bigger than the Korean market worth $800 million. In a market like this, only those who are flawlessly professional can survive," Billboard said.

In a first for a Korean musical act, BTS also reached the top of the Billboard chart of the top 200 albums with their latest record "Love Yourself: Tear," released on May 18.

Objectively speaking, Psy enjoyed a more broad-ranging popularity with Gangnam Style. But his popularity quickly died down after his follow-up efforts came out, according to Billboard.

"In comparison, BTS, having started with a small fan club, is expanding its musical boundaries and fan base through shrewd, organized strategies," it said. "Such a challenging approach by BTS should be highly appreciated in the entertainment industry where it's easy to seek short-term popularity."

Still, the K-pop industry needs to keep pushing its boundaries and remaking itself, as the Latin music market is doing, in order to appeal to the ever-changing global market, the company also suggested.

Billboard is keenly following the Asian music market, it said. With speedy population growth and stable economic expansion, the Asian market is likely to record further external and internal growth.

Billboard Korea came back in business in December last year after Billboard previously shut down its Korean branch. The business reopening came as Billboard discovered the potential of the K-pop market. The American company also said it is currently working on entering the local performance business and acting as a better bridge between the K-pop industry and the overseas market. 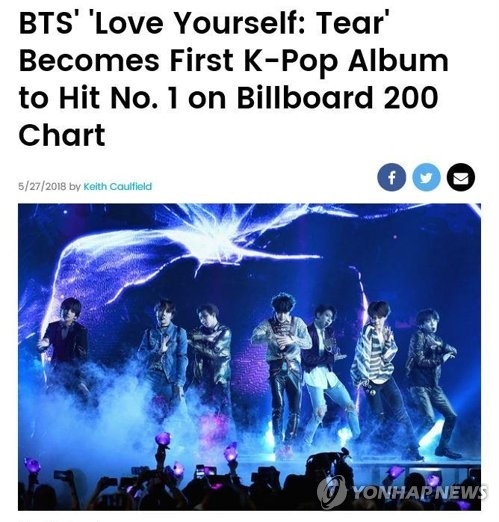