SEOUL, June 5 (Yonhap) -- South Korea's election watchdog on Tuesday urged Ahn Cheol-soo, a Seoul mayoral candidate, to comply with election law after he was found to have illegally campaigned on a subway train.

Footage showed that Ahn of the minor opposition Bareunmirae Party explained his pledges on public transportation to subway passengers on May 28 as part of his campaigning for in the June 13 local elections.

In South Korea, candidates for elections are not allowed to make a speeches on public transportation, including subways, trains and airplanes, or in places like hospitals and subway stations.

The National Election Commission (NEC) found the violation was not serious and on Monday took the lowest-level administrative step of calling for compliance with the law.

"We sent a document urging efforts for fair elections to Ahn's side. The law violation did not appear grave, but we took the step to encourage him not to repeat such an act," an official at the watchdog said. 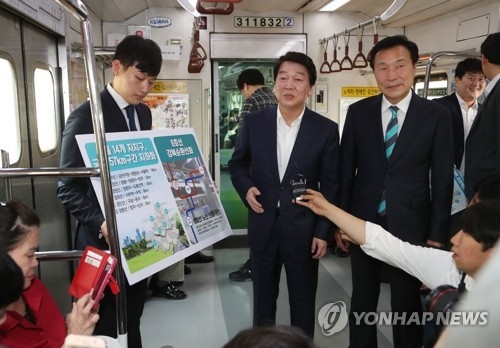