An internal probe by the National Court Administration (NCA) under the top court has found the NCA wrote about 410 documents in March 2015 on how to take advantage of high-profile cases so as to persuade senior presidential aides to support then-Chief Yang Sung-tae's plan to establish a court of appeals.

The agency's officials are alleged to have communicated frequently with then-President Park Geun-hye's aides and influential politicians over cases, such as those involving an opposition lawmaker, a former spy chief and a left-wing teachers' union.

Justice Ahn Chul-sang, head of the NCA, said earlier the agency would release the files without disclosing the names of the persons mentioned.

The released documents showed Yang's top court had discussed which district court should deal with the trial on the Sewol ferry sinking that took more than 300 lives in 2014. Park government's mishandling of the disaster later became one of the triggers that led to moves toward her impeachment.

The top court also proposed the president have the final say about appointing justices for the court of appeals once it is established, according to the documents. It highlighted that the president's hand in the appointment process must be kept discreet so as to quell concern over judicial independence being undermined.

Yang denied the accusations last Friday and said there was no unfair interference in trials and that he never used them for bargaining. He also denied any disadvantage was meted out to judges who opposed his proposal to set up a court of appeals.

Current Supreme Court Chief Kim Meong-su apologized to the public last week over the allegations. He signaled that the court could take action to criminally punish those involved, possibly including Yang. 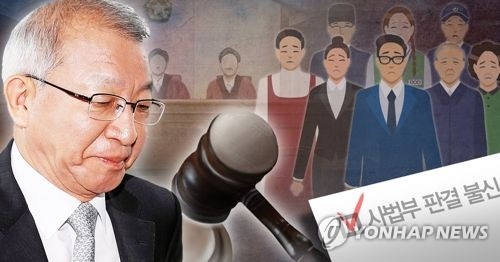