SEOUL, June 5 (Yonhap) -- The rival parties on Tuesday were divided over the result of a recent opinion poll ahead of the June 13 local elections and parliamentary by-elections.

The ruling Democratic Party (DP) is widely expected to win the elections on the back of strong public support for President Moon Jae-in and his drive for inter-Korean rapprochement.

A survey commissioned by three major broadcasters showed Monday that the liberal party is leading the parliamentary races in 11 of 12 districts contested.

The poll raised the possibility of the main opposition Liberty Korea Party (LKP) winning no seats. The conservative party's representative is losing to an independent candidate in Gimcheon, some 234 kilometers south of Seoul, one of the party's traditional turfs. The DP did not field a candidate in the district. 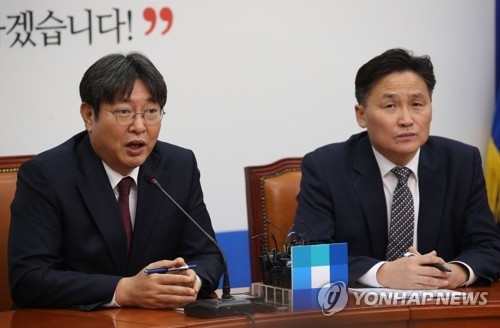 The LKP raised doubts about the reliability of the survey.

"With the manipulated opinion polls, the broadcasters are trying to get LKP supporters to not vote," Hong Joon-pyo, the LKP's chief, claimed on Facebook.

The DP said the poll reflects voters' support for the party.

"We think that we will be able to overwhelmingly win in half of the districts. But as for the remainder, we could produce good results if we do our best," Lee Choon-suak, secretary-general of the DP, told a press briefing.

The approval rating for the ruling party was 53 percent last week, compared with 11 percent for the LKP, according to a poll by Gallup Korea released last Friday.

A total of 4,028 officials, including 17 metropolitan mayors and provincial governors, will be chosen in the upcoming local elections. Parliamentary by-elections will be also held together with the local elections for the first time.

The elections are widely viewed as a barometer for President Moon's first year in office. Moon took office in May last year. 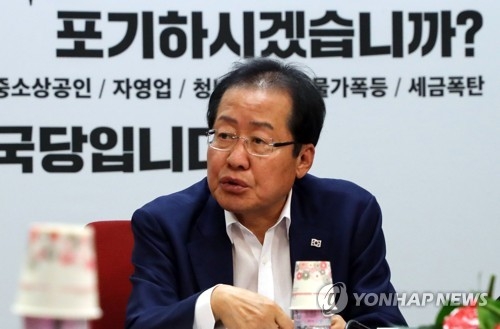 Officials from the rival parties visited the central Chungcheong provinces Tuesday to appeal for voter support. The region has historically swung between conservatives and liberals in major elections.

The ruling party calls on voters to support the government's reform drive and highlights that Moon's peace efforts helped bring rapprochement to the Korean Peninsula.

The LKP is lashing out at the government's economic policy. In particular, it criticized the government's increase of the minimum wage, which it said has unintended negative impact on job growth.