SEOUL, June 5 (Yonhap) -- President Moon Jae-in vowed to continue increasing government support for national heroes and veterans Tuesday, saying it is not only right to reward those who sacrifice their lives for their nation but that it is a way to make the whole nation stronger.

The meeting held at the presidential office Cheong Wa Dae came one day before the country's Memorial Day. 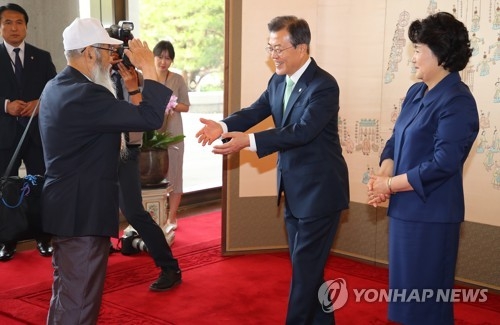 President Moon said his government has been working to expand its support for the people of merit and their families since it took office in May last year.

Such efforts included raising the monthly compensation for war veterans to a record level, as well as an expansion of insurance coverage of medical expenses for such persons to 90 percent from 60 percent.

"The government will continue to raise the value of patriotism. It will not blame the lack of sufficient funds or necessary regulations for its failure. The nation will pay its due respect to all who deserve such treatment by finding every last hero," the president said, according to Cheong Wa Dae pool reports.

Tuesday's meeting was also attended by the bereaved families of two school teachers killed in the tragic Sewol ferry sinking in April 2014.

Moon said heroes did not only exist in wars or major disasters but that each and every person who give up their lives while protecting those of others also deserved to be called heroes.

The president said their recognition as military heroes was because they died while trying to save lives on a sinking ship, a task originally entrusted with the Coast Guard, and also because such recognition afforded higher honor and reward than treatment for public officials killed in the line of duty.

"It was the least the country could do for the two who showed what a true teacher is," Moon said.