SEOUL, June 5 (Yonhap) -- Prime Minister Lee Nak-yon said Tuesday the recent removal of a statue symbolizing Korean victims of forced labor during Japanese colonial rule was because the installation of the statue near the Japanese Consulate in the southern city of Busan violated the law.

Activists installed the statue on a sidewalk about 30-40 meters away from the Japanese consulate last month after their original attempt to put it directly in front of the diplomatic mission fell through. Still, the installation was unlawful because the activists didn't get permission from road authorities.

Last week, local government officials in Busan forcibly removed the statue with the help of some 1,500 riot police, sparking clashes with about 100 activists. The statue was taken to a museum that honors forced labor victims.

"If the laborer's statue is to be installed, there must be permission from the road management agency, but it was installed in breach of such a procedure. That is illegal," Lee said at the start of a Cabinet meeting he presided over.

The central government had earlier offered alternative sites for the installation, stressing that erecting the statue in front of the Japanese mission violates an international convention on the protection of foreign missions. But activists rejected the offer.

Historians say that millions of Koreans were coerced into labor during the Japanese colonial rule of the Korean Peninsula from 1910-1945. 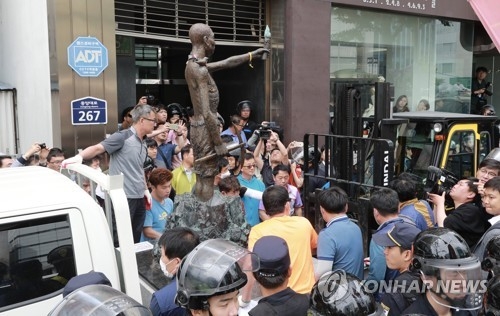