SEOUL, June 5 (Yonhap) -- Choe Ryong-hae, believed to be North Korea's second-most powerful man after leader Kim Jong-un, has recently increased his economy-related activities, apparently on behalf of Kim, who is busy preparing for his June 12 summit with U.S. President Trump in Singapore.

A report from Pyongyang said Tuesday that Choe, vice chairman of the North's State Affairs Commission, visited cooperative farms, a fish farm and a food factory in regions south of the capital, following his earlier visits to an auto assembly plant and a foodstuff factory in late May.

North Korea watchers say it is unusual for Choe, who leads the organization guidance department at the ruling Workers' Party, to concentrate his external activities on the economy. 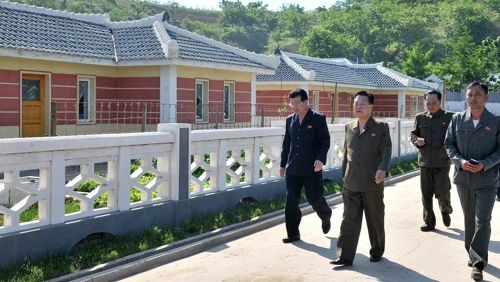 They note Choe's economic field visits spiked after leader Kim declared a shift in his policy focus to the economy at the party's plenary Central Committee meeting on April 20. Until then, the impoverished North had pursued the so-called Byungjin policy of developing both the military and the economy.

The analysts speculate that Choe's increased economic activities are a move by the North's regime meant to encourage party officials nationwide to more actively participate in economic development.

According to a report of the Rodong Sinmun, the party's main newspaper, Choe inspected the Poman Co-op Farm in Sohung County, the Rinsan Catfish Farm, the Jongbangsan General Foodstuff Factory and the Migok Co-op Farm in Sariwon City.

At the Poman farm, he stressed the need for officials and agricultural workers to dynamically raise the hot wind of scientific farming, said the report, which was also carried in English by the official Korean Central News Agency.

Choe told workers at other farms and the factory to "put production process on a modern and scientific basis of higher level and increasing the grain production," it said. He also urged the party's North Hwanghae Provincial Committee to achieve signal achievements in production.

Meanwhile, North Korean Premier Pak Pong-ju has also been doing his part in the North's fresh drive for economic growth. 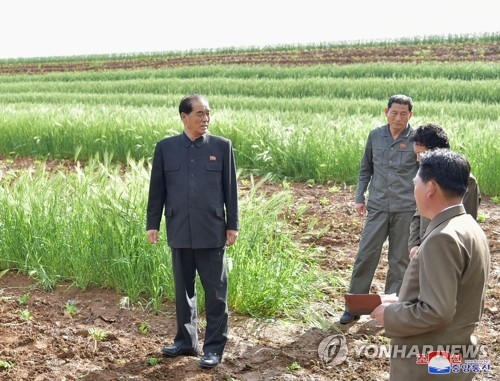 According to the party newspaper, Pak's recent economic field trips included the Taedonggang Combined Fruit Farm, the Namsa Co-op Farm of Rangnang District, the forest conservation material and equipment factory under construction by the Ministry of Land and Environment Protection, and the Pyongyang Essential Oil Factory, which is also under construction.

Hong Min, a researcher at the Seoul-based Korean Institute for National Unification, said that Choe and Pak appear to have strengthened their responsibilities for economic development, while leader Kim is fully occupied with preparations for his high-stakes meeting with Trump.