SEJONG, June 5 (Yonhap) -- The South Korean government is in discussions with General Motors Co. to use the closed Gunsan factory as a way to boost the local economy and employment, a senior industry official said Tuesday.

The American carmaker shut down the Gunsan factory, located 274 kilometers south of Seoul, on Thursday as part of a global restructuring plan aimed at cutting costs.

The plant shutdown poured cold water on the city, with a population of 270,000, which was already reeling from the closure of Hyundai Heavy Industries Co.'s shipyard last year.

"The government is well aware that Gunsan's economy is undergoing a very hard time," Moon Sung-wook, a senior official at the Ministry of Trade, Industry and Energy, said in a meeting with reporters. "Discussions are currently under way with GM and other related ministries to find a relevant way to utilize the plant at an earlier date."

As part of efforts to revitalize the local economy, the government last month designated the port city as an emergency response zone so as to provide residents with job support and tax incentives.

"The Gunsan factory is GM's asset and GM doesn't plan to use it for car manufacturing, but the production line is decent," Moon said. "If there's anybody that can make good use of it, GM is ready to cooperate with the (Korean) government in any way" including through an asset sale. 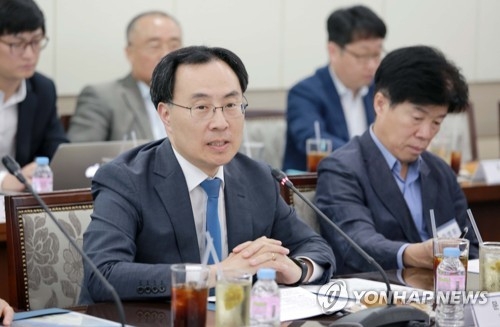 Gov't in discussions with GM to utilize closed Gunsan factory

Gov't in discussions with GM to utilize closed Gunsan factory