SEJONG, June 5 (Yonhap) -- More effort should be put in to improving the business environment and boosting the quality of life as South Korea seeks to remain competitive on the global economic stage, a senior government official said Tuesday.

Late last month, a report by the International Institute for Management (IMD) showed that South Korea's global competitiveness ranking moved up two notches this year due to stable economic growth and expanded infrastructure.

The country ranked 27th in terms of global competitiveness among 63 countries surveyed.

"We need to do more to create a business friendly environment and boost life quality."

The report is based on a country's economic achievements, infrastructure, and government and corporate efficiency. The IMD has been issuing the report since 1997.

South Korea, on the other hand, finished 43rd in corporate efficiency, its lowest ranking among the four assessment criteria, as an inflexible labor market and opaque corporate management system kept the country from earning higher marks.

In addition, the country's standing in government efficiency dropped one grade to 29th this year due to the worsening public finance situation. 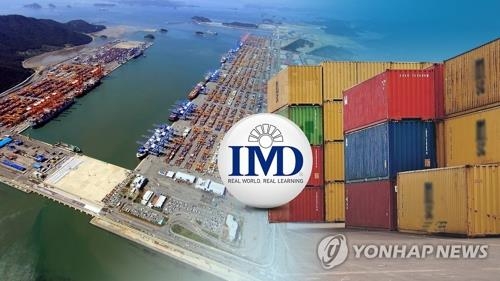