SEOUL, June 5 (Yonhap) -- While chasing a serial killer in 2018, a detective is involved in an accident. When he regains consciousness, he finds himself in 1988. Wondering if he is dreaming, he becomes extremely confused, as if he'd landed on a different planet -- like Mars.

The set-up is the backdrop of the new OCN series "Life on Mars," the Korean adaptation of a popular British TV series broadcast on BBC One from January 2006 to April 2007.

During a press conference in Seoul on Tuesday, director Lee Jung-hyo emphasized that the story is not about a time slip but about a confused man and the grey area between fiction and reality in which he suddenly finds himself.

"I decided to produce this series when I was sure that I could make some interesting stories out of dream and reality," the director said.

"The protagonist gets to live in the in-between area where he embarks on a journey to find his true identity and encounter and experience good things from the past." Actor Chung Kyung-ho plays Han Tae-joo, a level-headed detective who meticulously uses modern policing technologies and techniques to solve cases. When he awakens in the year of 1988, he finds himself still chasing the same serial killer suspect.

He is frequently at odds with senior detective Kang Dong-chul, played by Park Sung-woong, who is the exact opposite of him when it comes to policing. Kang often follows his gut instinct, couldn't care less about forensics and resorts to coercion and evidence fabrication. 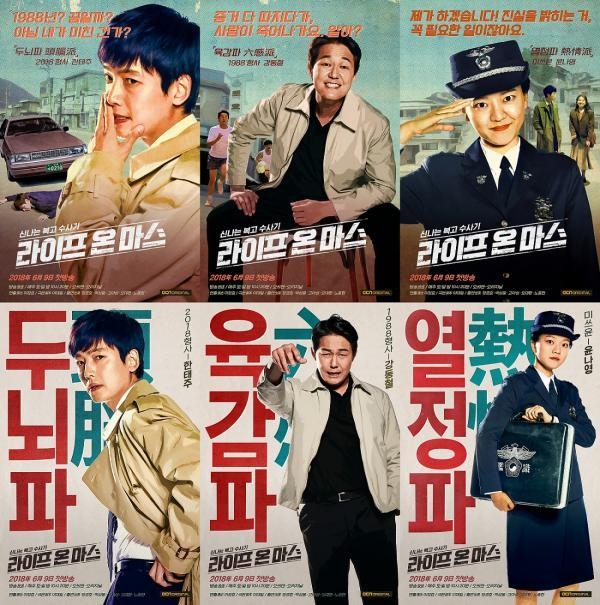 He didn't look up the original series in order to create his own version of the character. Park put on more than 10 kilograms in weight to make a strong contrast with the sharp and smart young detective Han.

On the other hand, Chung said he watched the original series for the same reason -- to portray the character in his own original way.

"Putting every element aside, the drama is also Han Tae-joo's coming-of-age story. As the story develops, the TV audience will see how he grows as a human being," Chung said.

He also said working on set couldn't have been more enjoyable.

"I rarely felt I was enjoying myself on set. But this drama makes me feel almost like playing. It doesn't feel like working at all," he said, citing the great chemistry among cast members and all-out support from the producer.

The science fiction series has been remade in multiple nations, including the U.S., Spain, Russia and the Czech Republic. The original British one won the International Emmy Award for Best Drama Series in 2006 and 2008. It was also nominated for a British Academy Television Award in the Best Drama Series category in 2007.