An average household earned 4.76 million won (US$4,400) per month in the January-March period, jumping 3.7 percent from a year earlier, according to Statistics Korea. The on-year growth is the quickest since the first quarter of 2014, when the figure was 5 percent.

The monthly average income of the bottom 20 percent income bracket, on the other hand, dropped 8 percent on-year to 1.28 million won, the sharpest drop since 2003, when such data began to be compiled. In contrast, households in the upper 20 percent income range earned 10 million won during the first quarter, up 9.3 percent from a year earlier.

Consequently, the country's total distribution ratio for disposable income, a key barometer of earnings equality, reached 5.95 in the January-March period, up 0.6 from a year earlier.

"The government is most worried about income and problems facing the bottom income bracket," Finance Minister Kim Dong-yeon told reporters. "We are in the process of finding a mid-and-long term solution to the disparity and we are also seeking to resolve this issue with next year's budget and tax overhaul."

As to the controversy over the impact of the country's minimum wage hike on employment and income growth, Kim said the government is in the natural process of finding the optimal policy.

The government said the hike is aimed at income-led economic expansion and a reduction of the pay gap between workers, but critics argue that the increase is hurting entry-level jobs and weighing down the local economy.

Early this week, state-run think tank the Korea Development Institute (KDI), estimated that up to 84,000 jobs have been lost after the wage hike took effect this year, but the real impact on the labor market might be much smaller than expected due to the government's financial support for small business owners.

The KDI has warned that the planned drastic increase in wages could result in a sharp drop in employment and advised the government to carefully weigh its future actions.

On the other hand, another local think tank said the legal hike in the minimum wage partly led to the rise in wage earners' income. 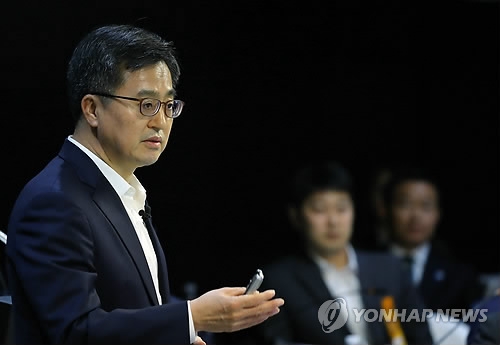