Justice Minister Park Sang-ki presented the certificate to his nephew, Raymond McGlinchey, during a ceremony at the ministry.

McGlinchey came to South Korea at age 26 in 1954, when the country was torn by the Korean War. He settled in the southern island of Jeju and engaged in missionary work and agricultural rehabilitation.

He trained residents with modern farming methods and founded St. Isidore Farm in 1961, which is now one of the largest hog farms in Asia. The farm earned him the nickname of "a boar father with blue eyes."

Profits from the farm were used to set up medical facilities.

"I express my deepest gratitude for late Father McGlinchey for his noble humanism and the sacrifice he had made for this country over the last 64 years," Park said. 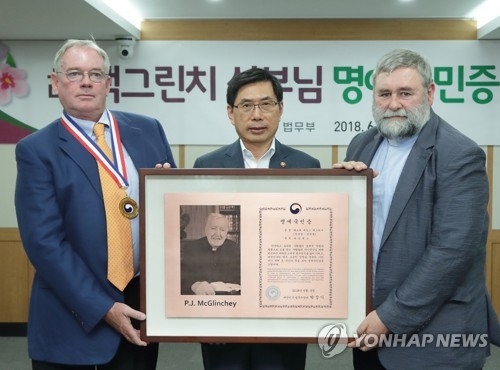