SEOUL, June 5 (Yonhap) -- Seoul Mayor Park Won-soon on Tuesday played down the impact of his two rivals' potential merger of campaigns for the June 13 local elections, saying the move would not appeal to voters.

Park of the ruling Democratic Party (DP) is leading the race against Kim Moon-soo of the main opposition Liberty Korea Party (LKP) and Ahn Cheol-soo of the minor opposition Bareunmirae Party.

Though there is a low chance of Ahn and Kim filing a single candidacy, it is still being speculated that they may merge to complete against the frontrunner, who seeks a third term.

"It is important to win the hearts of citizens in any election. So an act that is motivated only by purposes for winning an election would not affect an election," Park said.

"Recent pre-election polls show that there is a limit even if the two candidates join hands," he added.

Park is leading the race with nearly 47 percent in support, compared with 20 percent for Ahn and 13 percent for Kim, according to a survey. 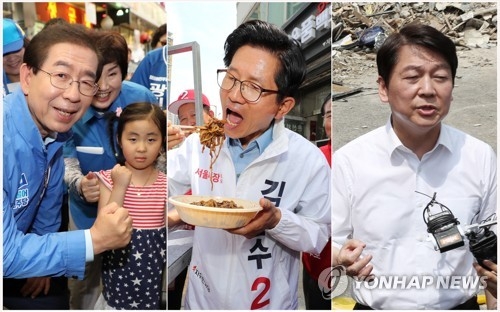 Ahn, a former presidential candidate, was a front-runner ahead of the 2011 by-election for Seoul mayor but later dropped his bid and supported Park.

The Seoul mayorship carries extra weight as it is often deemed a steppingstone to the presidency.

Hong Joon-pyo, the chief of the LKP, called on Ahn on Tuesday to give up his bid and lend support to Kim, a conservative politician and a former two-time governor of Gyeonggi Province.

"If Ahn makes a bold decision, the move would become a watershed occasion to make opposition parties join hands for a grand integration to deter the Moon Jae-in government," Hong said on Facebook.

Ahn and Kim had a closed-door meeting Sunday to sound out the possibility, but they failed to reach a conclusion, only to confirm a huge gap in opinions between them.

Kim repeatedly said it is almost impossible to unify his candidacy with Ahn, given the time left ahead of the elections.

Political watchers said Wednesday would effectively be a deadline for the merger as the results of opinion polls will not be allowed to be published starting from Thursday. Early voting is also slated for Friday and Saturday.

Meanwhile, Park's camp said it is focusing on how to boost voter turnout to minimize the number of voters who might skip voting on the assumption that the ruling DP will easily win in the election.

The upcoming elections could be also overshadowed by a historic summit between U.S. President Donald Trump and North Korean leader Kim Jong-un slated for June 12 in Singapore.