The chief executive attended a Philippine food festival and looked around Philippine fruits and other products at the E-Mart store in Seoul, an E-Mart official said.

Earlier in the day, E-Mart signed a letter of intent with the Philippine Department of Agriculture to expand sales of agricultural products from the Philippines in South Korea.

E-Mart said the deal could help boost sales of agricultural products from the Southeast Asian country by 10 percent a year.

Currently, the company, part of Shinsegae Group, sells about 110 billion won (US$103 million) worth of Philippine products a year -- 58 percent of which are pineapples and bananas.

Duterte was in Seoul for talks with South Korean President Moon Jae-in. On Monday, the two leaders agreed to enhance their countries' bilateral relations and expand their economic cooperation. 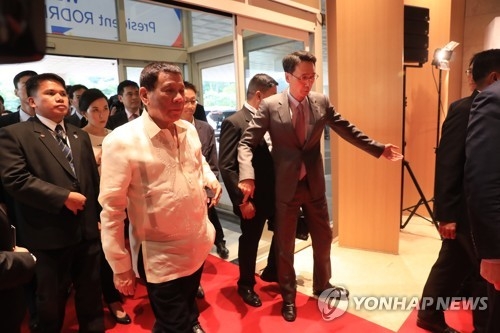