In announcing the location of the meeting, White House press secretary Sarah Sanders tweeted: "UPDATE: The venue for the Singapore summit between @POTUS and Leader Kim Jong Un will be the Capella Hotel on Sentosa Island."

POTUS is shorthand for president of the United States.

Sanders announced Monday that the first meeting has been scheduled for 9 a.m. Singapore time. 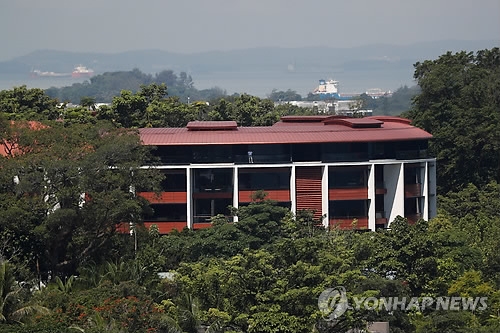 Advance teams from the U.S. and North Korea have been meeting at the luxury hotel on the island off the city-state to coordinate the logistics of the summit. A separate pair of teams has been meeting inside the Demilitarized Zone on the inter-Korean border to discuss the substantive issues.

The Capella was one of two places reportedly under consideration, along with the Shangri-La hotel. The Singapore government has issued a public order establishing special zones around both hotels from June 10-14, and access to the areas will be strictly controlled.

"We thank our great Singaporean hosts for their hospitality," Sanders added.

The on-again, off-again meeting was put back on last Friday after Trump met with a senior North Korean official at the White House. The envoy delivered a letter from Kim, but the contents have not been disclosed.

Trump has said his goal is to get rid of North Korea's nuclear weapons. But in recent comments he has played down expectations the issue will be settled in one meeting.

North Korea is in return seeking security guarantees for its regime.

The summit comes after the two leaders exchanged threats and personal insults over North Korea's testing of nuclear weapons and ballistic missiles.

"Meeting in Singapore with North Korea will hopefully be the start of something big ... we will soon see!" Trump tweeted early Tuesday.

Sentosa, meaning "peace and tranquility" in Malay, is Singapore's fourth largest island connected to the mainland via a 700-meter bridge. Legend has it that it was a pirate hangout. During Britain's colonial rule, it also served as a post for British troops.

Following independence in 1965, the Singapore government developed the island into a tourist resort with world-class facilities including resorts, golf courses and an aquarium.

With the pick of Capella, Trump is likely to stay at the Shangri-La.

Kim's hotel has reportedly been narrowed down to the Fullerton and the St. Regis.