SEJONG, June 6 (Yonhap) -- The number of South Korea's teen employees fell to the lowest-ever level in April, government data showed Tuesday, partly attributable to the effect of a hike in the minimum wage in January.

Employed people aged between 15 and 19 were tallied at 189,000 in April, dropping 28.6 percent from a year earlier, according to Statistics Korea. It is the biggest decease since the government compiled the data in July 1982.

Nearly 8 out of 10 teen workers had temporary positions, and more than half of them were employed in the food, accommodation and retail sectors, data showed.

Experts say the sharp fall in teenage employees was partly attributable to a spike in the minimum wage that increased labor costs of smaller companies and self-employed businesses like restaurants and retail shops.

"The fall in teen workers was seen as a result of a drastic spike in the minimum wage and the rigid labor market," said Sung Tae-yoon, an economics professor at Yonsei University. "Although employers may not immediately fire young workers, teens may find it harder to get new jobs."

On Monday, the state-run Korea Development Institute (KDI) said a drastic rise in the legal minimum wage could lead to a drop in employment and advised the government to take a flexible approach to adjusting the pay system. 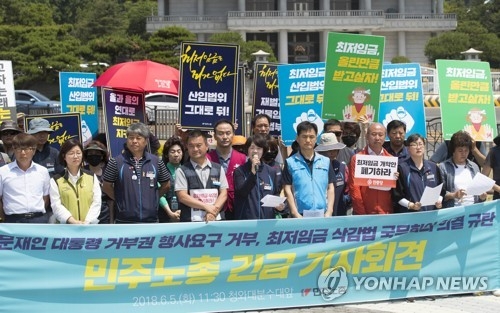