SEOUL, June 6 (Yonhap) -- President Moon Jae-in said Wednesday that he will push for the recovery of the remains of fallen soldiers in the Demilitarized Zone dividing the two Koreas in line with the improvement of ties with North Korea.

In his address at the 63rd Memorial Day ceremony at the National Cemetery in Daejeon, he expressed hopes that the fresh detente will pave the way for inter-Korean efforts to account for tens of thousands of service members still listed as missing in action from the 1950-53 Korean War.

"We will continue efforts to recover the remains of military and police members who fell during the Korean War until we find the last remaining person," the commander in chief said.

"When the South-North relations improve, we will push for the recovery of the remains in the Demilitarized Zone first of all. We will also be able to retrieve the remains of U.S. and other foreign soldiers who participated in the war."

Troops from 16 countries fought for South Korea under the United Nations flag during the war.

Before the ceremony, the president visited the graveyard of fallen solders without families. Accompanied by his wife and officials, he laid a wreath at the tomb of an Army sergeant who was killed on an eastern battlefield in May 1953. 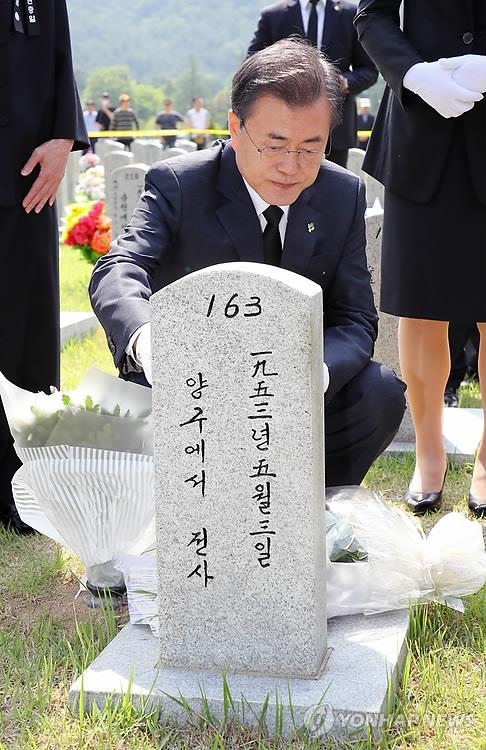 Soldiers, independence fighters, police officers, firefighters and government workers who sacrificed their lives for the country are buried at the cemetery in Daejeon, some 160 kilometers from Seoul.

In his second Memorial Day address as president, Moon pledged to boost efforts to honor veterans and patriots and support their bereaved families.

He noted the government budget for veterans affairs has surpassed 5 trillion won (US$4.7 billion) this year for the first time. The government has increased special allowances for living patriotic heroes by 50 percent and will open new nursing hospitals and rehabilitation facilities for them in major cities, he added.

Moon also said the restoration of the command headquarters of Korean independence war troops will be completed by April 2019, the 100th year of the foundation of the Korean provisional government in exile during Japan's colonial rule from 1910-45. The facility is located in Chongqing, southwest China.

On Tuesday, Moon hosted a lunch meeting with some 200 national heroes, war veterans and their families at the presidential office Cheong Wa Dae. The meeting was also attended by the bereaved families of two school teachers killed in the tragic Sewol ferry sinking in April 2014.
(END)