Oh was the losing pitcher as the New York Yankees beat the Jays 7-2 at Rogers Centre in Toronto on Tuesday (local time), behind Miguel Andujar's go-ahead, grand slam off Oh in the seventh inning.

The South Korean right-hander was charged with three earned runs in one inning of work, after relieving starter Marco Estrada with a runner on base and nobody out in the seventh.

Oh dropped to 1-2 for the season and his ERA ballooned from 3.12 to a season-worst 4.00. Oh also took a loss in his previous outing Saturday against the Detroit Tigers, when he was roughed up for three earned runs in 2/3 of an inning.

With the Jays ahead 1-0, Oh took over from Estrada after the starter gave up a leadoff single to Gary Sanchez in the seventh. Oh promptly hit Didi Gregorius, who attempted to put down a sacrifice bunt and then walked Aaron Hicks to load the bases.

And Andujar jumped on a first-pitch cutter from Oh and put it in the upper deck in left field for a grand slam, as the Yankees took a 4-1 lead.

Oh stayed in the game to retire the next three batters in order, but the big damage had been done. The Blue Jays managed to get one run back in the bottom seventh, but the Yankees tagged on three more in the top eighth for an easy win.

The bullpen struggles continued for the Blue Jays. Estrada threw his best game in a month and still remained winless since April 20 as Oh and the rest of the pen squandered the lead over the final three innings.

Toronto had the second-best bullpen ERA in April at 2.28, but that number ballooned to 5.12 in May, ranking 27th of the 30 big league clubs. Prior to this disastrous game, the Jays had the third-worst team ERA in the American League in June at 5.76, with a bullpen ERA of 5.11. 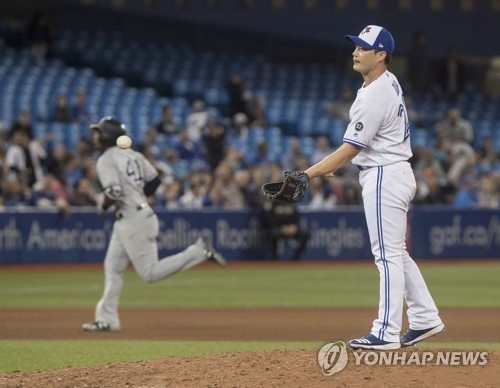