Choo launched a game-tying, two-run homer in the bottom of the seventh inning against the Oakland Athletics at Globe Life Park in Arlington, Texas, on Tuesday (local time). Choo's blast, his 10th of the season, knotted the score at 4-4, and the Rangers went on to win the game 7-4.

Choo has now reached double figures in home runs for the ninth time in his career. In addition to the hitting streak, Choo has also reached base safely in 21 consecutive games, the third-longest streak of his career.

The longest such streak for Choo is 35 games, which he accomplished over the course of the 2012 and 2013 seasons.

Batting leadoff and playing left field, Choo drew a walk in his first at-bat. He flied out to center in the second and lined out to third in the fifth.

Then Choo went deep in the seventh off Oakland reliever Yusmeiro Petit, sending an 82-mph changeup over the left center field wall.

Choo struck out in his final at-bat in the eighth inning but by then the Rangers had put up three more runs on the board -- on Adrian Beltre's solo homer and Joey Gallo's two-run shot -- to take a 7-4 lead. 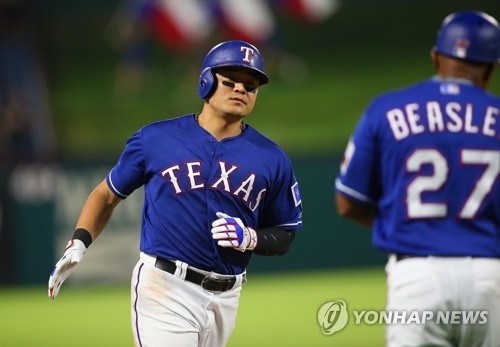