LEOGANG, Austria, June 6 (Yonhap) -- South Korea football coach Shin Tae-yong said Wednesday his side will use a back four system in their World Cup tuneup against Bolivia.

South Korea will take on Bolivia at Tivoli-Neu Stadium in Innsbruck, Austria, on Thursday. It's their first World Cup tuneup with the final roster of 23 players.

"We'll use a back four system tomorrow," Shin told reporters before training at Steinbergstadion in Leogang, Austria, where the national team has been staying since Monday. "For our defensive cohesion, we'll use our World Cup starting 11 in the upcoming tuneup matches." 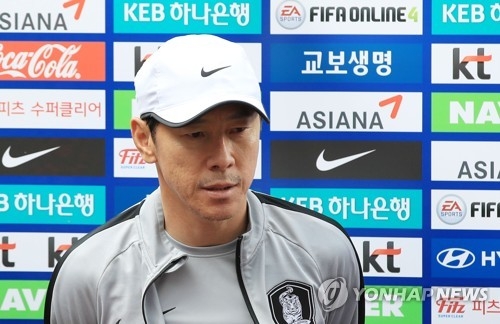 After facing Bolivia, South Korea will play against Senegal at Das.Goldberg Stadium in Grodig, Austria, on Monday. Shin's team will fly to its World Cup base camp in Saint Petersburg, Russia, on Tuesday. South Korea are in World Cup Group F with Sweden, Mexico and Germany.

In their previous World Cup tuneup at home, the Taeguk Warriors tested a three-man defense against Bosnia and Herzegovina, with captain Ki Sung-yueng playing as a libero. However, they suffered a 3-1 defeat.

Shin said center back Jang Hyun-soo, who missed South Korea's two friendly matches at home due to an ankle injury, will be back in action.

Shin, however, said South Korea will not show everything they have prepared for the World Cup in the match against Bolivia. South Korea are scheduled to open their World Cup Group F campaign against Sweden on June 18.

"For the Bolivia friendly, our best 11 will only show about 60 to 70 percent of the things (that we've prepared for the World Cup)," he said. "Our focus is on our opening match against Sweden."

(World Cup) S. Korea to use back 4 in friendly vs. Bolivia

(World Cup) S. Korea to use back 4 in friendly vs. Bolivia