South Korea will open their World Cup Group F campaign against Sweden in Nizhny Novgorod, Russia, on June 18. Son said his side is aware of Sweden's tough defense but will overcome the challenge.

"Just because they are tall doesn't mean they're good at playing football," Son said of Swedish defenders before his team's training in Leogang, Austria. "Tall players often show their weakness to small players. Sweden are a team with good teamwork, but we'll find their weaknesses."

Sweden are considered to be stronger than South Korea in the air. Four of their defenders are 190 centimeters or taller, which will give a stern test to South Korean forwards. Son is listed as 183 cm, while his partner Hwang Hee-chan is 177 cm.

South Korea's 23 players have been training at their pre-World Cup training camp in Leogang, Austria, since Monday. After playing tune-ups with Bolivia and Senegal, the Taeguk Warriors will fly to their World Cup base camp in Saint Petersburg in Russia on June 12.

"I'm gearing up for the match against Sweden," said Son, who plays with Tottenham Hotspur in the English Premier League. "Even if I'm not in good form, I know what I should do."

Son, who has 21 goals in 65 international matches, will first try to show his skills with teammates in South Korea's World Cup warm-up against Bolivia in Innsbruck, Austria, on Thursday. He added that the team atmosphere in Austria has been great.

"We must earn confidence through the Bolivia match," he said. "The players can only get their confidence and energy on the pitch."

In Austria, South Korea also have been practicing their set pieces for the World Cup. Son, however, refused to divulge details of their set piece plans.

"I don't want to be the man who ruins our plan," said Son, who will play in his second World Cup in Russia. "A decisive goal can come from set pieces, and it's now easy for opponents to get information on us. So I don't want to talk about set pieces for now." 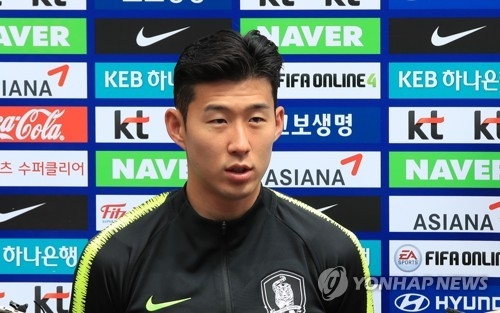