Bolton has been a target of North Korean anger since he called for applying a so-called Libya model to the dismantlement of Pyongyang's nuclear weapons program.

That means removing all nuclear weapons and related facilities from the North before rewarding the regime with economic benefits.

Pyongyang threatened to cancel the June 12 summit over the remarks and later singled out U.S. Vice President Mike Pence for suggesting North Korea could meet the same fate as Libya's collapsed regime if it failed to denuclearize.

In response to a query from Yonhap, a White House National Security Council official confirmed that Bolton will travel to Singapore, but it was unclear whether he would sit at the table with the North Koreans.

Last week both Bolton and Pence were absent from a White House meeting between Trump and a North Korean envoy, who delivered a personal letter from Kim.

Trump said after that meeting that the summit was back on, just days after he had canceled it over "open hostility" from the North. 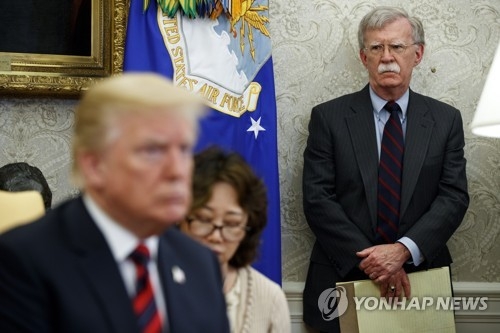 Bolton to be in Singapore for U.S.-N. Korea summit

Bolton to be in Singapore for U.S.-N. Korea summit