SEOUL, June 7 (Yonhap) -- Milwaukee Brewers' South Korean hitter Choi Ji-man has struck out three times in what may have been his last big league game in a while.

Choi went 0-for-3 with three strikeouts against the Cleveland Indians at Progressive Field in Cleveland on Wednesday (local time), before getting lifted for a pinch hitter in the Brewers' 3-1 loss.

Choi is in the midst of his third stint with the Brewers this season. He made the Opening Day roster but was optioned to Triple-A after just one game. With injuries to first baseman/outfielder Ryan Braun in mid-May, Choi was brought up for a five-game stretch, during which he went 3-for-14 with a home run and an RBI.

Choi was called up last week ahead of the Brewers' five-game interleague road trip against the Chicago White Sox and the Indians, so that he could serve as the designated hitter.

He started four of those five games as DH but went just 1-for-13 with seven strikeouts.

The first baseman/outfielder will likely be the odd man out in the Brewers' logjam once again, with first baseman Eric Thames on track to return from his left thumb injury next Monday.

The Brewers will return to playing in the National League parks for the rest of June. 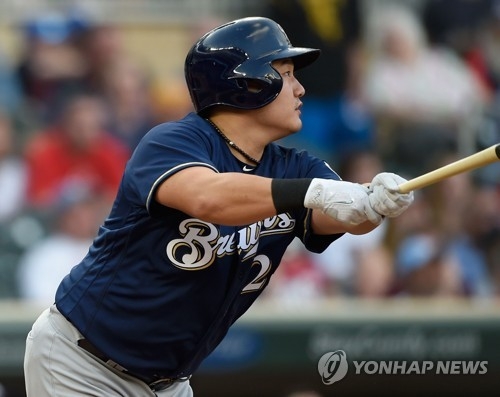