Eligible voters can cast ballots at 3,512 polling stations nationwide from 6:00 a.m. to 6:00 p.m. starting Friday, according to the National Election Commission (NEC).

The local elections will determine 4,016 administrative, legislative and educational posts, including 17 metropolitan mayors and provincial governors. The by-elections will be held to fill 12 vacant seats in the National Assembly.

Three out of 10 voters said that they would cast their ballots during the early voting period, according to a survey conducted by Realmeter.

It said that 28.1 percent of those surveyed expressed a willingness to participate in early voting, while 36.4 percent said that they would vote on election day. It showed that 33.5 percent had not decided when to vote.

The publication of new opinion polls is banned for the campaign as of Thursday.

Recent polls showed that the ruling Democratic Party (DP) has a sizable lead in both the local elections and parliamentary by-elections.

The Realmeter poll showed the approval rating for the DP reached 52 percent this week, followed by the main opposition Liberty Korea Party with 18.5 percent. 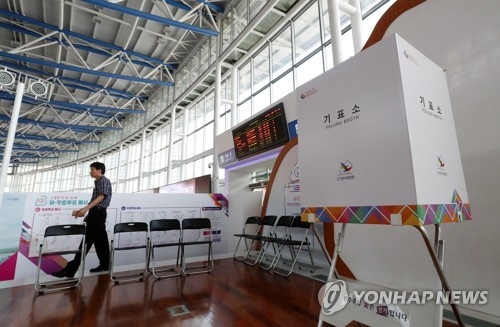