SEOUL, June 7 (Yonhap) -- The chief of the main opposition Liberty Korea Party (LKP) said Thursday that the United States should pull out of next week's summit with North Korea if Pyongyang does not agree to complete, verifiable and irreversible denuclearization (CVID).

Hong Joon-pyo, the party chairman, also objected to a possible declaration of an end to the 1950-53 Korean War when U.S. President Donald Trump and North Korean leader Kim Jong-un hold a summit on June 12 in Singapore.

"If any moderate deal provides North Korea with assistance, there is a risk that Pyongyang would advance its nuclear and missile programs, posing a threat (to the Korean Peninsula)," Hong said in a press conference with foreign correspondents in Seoul.

He said that a declaration of an end to the war should be made only after North Korea completely dismantles its nuclear arsenal.

"I'm strongly opposed to the declaration on the occasion of the upcoming summit," he said. "A possible cut or withdrawal of U.S. troops stationed in the South should also not be on the table." 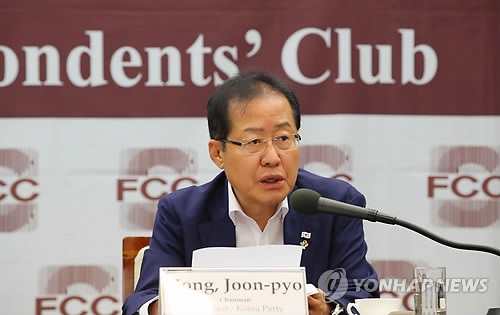