The KJA said the South will send college judokas selected by the Korea University Judo Federation to the East Asian Judo Championships.

"Our team departed for Mongolia today," the KJA said. "Once they arrive, we'll talk with North Koreans and finish discussions on the joint team and will compete in the tournament."

The KJA said Mongolian organizers and officials from East Asian judo body first proposed idea of forming a joint Korean team in this year's competition. South Korea has in the past sent college judokas to the East Asian Judo Championships, giving opportunities to prospects and promising athletes. A KJA official said that this year it was relatively easy to form a joint team since the nation's top judokas are not on the team after long trials.

"We have yet to finalize how we should operate this unified team," the KJA official said. "We'll first join hands with North Koreans in the team event, but we can also compete together in individual events as Team Korea."

Meanwhile, the International Judo Federation (IJF) said the two Koreas will compete under the same flag in team events -- both men and women -- on Sunday. It added that the Koreas will use Arirang, a popular Korean folk song, as their anthem and will use the unified Korean flag.

This year, South Korea and North Korea competed together in women's ice hockey at the PyeongChang Winter Olympics. Both sides are also set to discuss forming a joint team for the Asian Games in Indonesia this summer. 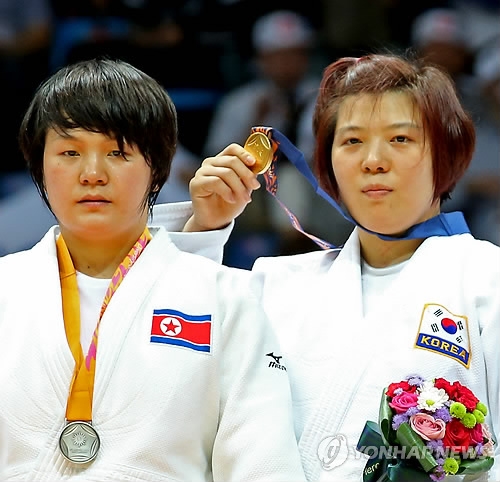