SEOUL, June 7 (Yonhap) -- Archaeologists have found the remains of what appears to be a sixth-century palace of Ara Gaya, a city-state kingdom that existed in the Korean Peninsula's southeastern area and had exchanges with the ancient Korean kingdoms of Silla and Baekje, and Japan, a state-run archaeological think tank said Thursday.

Ara Gaya, also known as Ana Gaya, Asiryangguk and Alla, was a city-state kingdom in the Gaya confederacy of chiefdoms and was situated around what is now the town of Haman in South Korea's South Gyeongsang Province, from 42 B.C. to A.D. 559, according to descriptions of the kingdom in Korean and Japanese ancient history books.

The Gaya National Research Institute of Cultural Heritage said its archaeologists have excavated earthen ramparts and wooden fences at a site in the town, which is believed to have been built in the fifth or sixth century. The excavation work began last month.

The ramparts have a height of 8.5 meters and an upper width of 20 to 40 meters, with its length running about 40 meters. 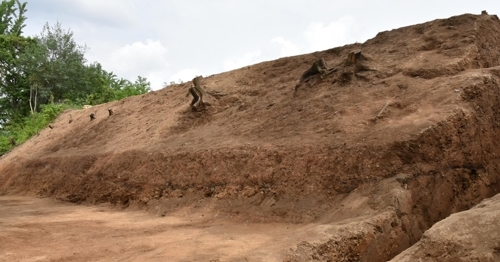 Kang Dong-seok, a researcher at the institute, said the earthen ramparts are the largest among the known ramparts in the Gaya confederacy in the country's southeastern area, suggesting it could be a palace where the kingdom's rulers lived.

Inside the ramparts, remains of buildings and holes were discovered in addition to two rows of log cribs on the upper part of them that are believed to have been installed to prevent enemy approaches.

The institute said the discovery of the ramparts indicates the existence of a strong political power capable of mobilizing a massive labor force and is a boost to its study of the livelihood of the ancient kingdom's ruling class.

Remains of what appears to be state kingdom's palace found in southern S. Korea

Remains of what appears to be state kingdom's palace found in southern S. Korea