SEOUL, June 7 (Yonhap) -- South Korea is pushing for an early agreement with North Korea and the United States to officially end the Korean War, a largely symbolic, political move to pave the way for a peace regime on the peninsula, the Ministry of Foreign Affairs said Thursday.

"Three-way discussions among the South, the North and the U.S. are underway on the declaration of an end to the war," ministry spokesman Noh Kyu-duk said at a twice-weekly press briefing.

South Korea will continue close consultations with the two sides to make the war-ending announcement as early as possible, he added.

Noh would not be drawn into questions on details, saying Pyongyang and Washington are also talking to each other about denuclearization and a security guarantee, which are connected with formally ending the war.

Briefing reporters on the results of his White House meeting with a top North Korean envoy, Kim Yong-chol, last week, President Donald Trump acknowledged that the issue was discussed.

He indicated that it will be among the agenda items when he negotiates with North Korean leader Kim Jong-un at a Singapore hotel next Tuesday. 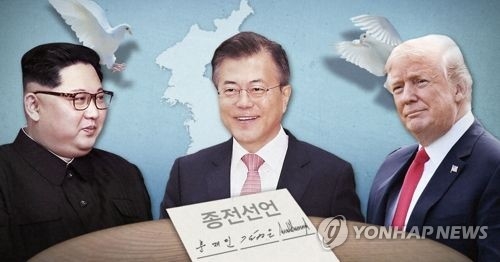 In case progress is made, South Korean President Moon Jae-in may join them for a trilateral accord and a ceremony in Singapore. The three countries may organize a separate event at Panmunjom inside the Demilitarized Zone (DMZ) as an alternative. The three-year war finished on July 27, 1953 with the Armistice Agreement. The three sides commemorate the anniversary with their own official ceremonies.

During their summit talks at Panmunjom on April 27, Moon and Kim agreed to "actively pursue trilateral meetings involving the two Koreas and the United States, or quadrilateral meetings involving the two Koreas, the United States and China" with a view to declaring an end to the war and replacing the armistice with a peace treaty.

As shown in the joint statement, the South Korean government has been ostensibly vague about whether China should be involved in the declaration process, although it says China will be a signatory to the envisioned peace treaty as it was to the Armistice Agreement.

"South Korea and China have been on friendly terms with each other since the establishment of diplomatic relations in 1992. It may look awkward for the two sides to declare an end to the war," the official told reporters on condition of anonymity.