SEOUL, June 8 (Yonhap) -- Yang Jong-moon's routine for the past few months has involved dropping by his apartment complex's community center once or twice a week to pick up breakfast before he heads off to work.

In September, the Banpo Riche apartment building where he lives began to offer breakfast to its residents at the reasonable price of 4,500 won (US$4), although that has recently been adjusted to 5,500 won. The decision to offer the meal reflected demand from students, single-member and double-income households and seniors.

"I prefer a light meal in the morning and think five minutes is plenty for me to have breakfast," Yang, a 53-year-old CEO of an IT venture in Seoul, told Yonhap News Agency in a recent interview. He claimed the service offered saves him time and even money.

Yang is one of the country's increasing number of apartment residents who want their breakfast to be prepared by their apartment complex instead of eating at home.

Banpo Riche's community center partnered with a catering service to provide breakfast to about 25 percent of its 1,119 resident households, largely people in their 30s and 40s, on week days, Kim Taek-kyo, who represents Banpo Riche residents, told Yonhap.

"Apartment builders and neighboring apartment community centers have shown an interest in our breakfast services. Some of them are regularly monitoring our services. We will continue to diversify the menu and offer quality food at good prices," he pointed out.

In recent years, apartment complexes, mostly ones in the affluent Gangnam area in southern Seoul, have taken the lead in adopting breakfast services to differentiate themselves from rivals.

In May, Banpo Xi apartments began to provide breakfast services after its residents, particularly working moms and retired senior couples, strongly requested such a move.

"Our apartment residents did want similar breakfast services to those offered by Banpo Riche and Seoul Forest Trimage (in northeastern Seoul). All breakfast items are on offer at 5,500 won and residents are happy with the service," Kim In-sook, chief of the Banpo Xi managing office, said.

Seoul Forest Trimage, an apartment complex with stores on the ground floor, has offered breakfast services since May 2017 from a restaurant operated by the community. Unlike purely residential apartment complexes, mixed commercial and residential buildings like Trimage are allowed to have an eatery with dedicated cooking facilities.

Upcoming apartment complexes such as DH Xi Gaepo, DH Honor Hills and Raemian Blesstige in southern Seoul are planning to offer breakfast to their residents as part of community services from the outset. 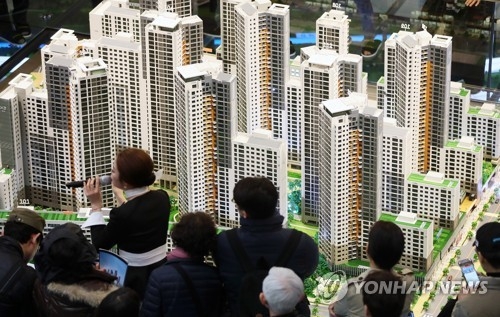 Various social changes in the country are reinforcing this demand for apartment buildings that offer breakfast.

By 2045, single-member households will top other forms of household in the country's 17 big cities and provinces and four out of 10 households will be composed of senior members aged 65 or older, according to data from Statistics Korea.

"I guess single-member and senior couple households want the breakfast service the most. They may not want to spend much on grocery shopping to prepare meals only for themselves as they think it is a waste of money and effort," an official at Statistics Korea said.

Apartment residents, meanwhile, said there will likely be apartments that offer lunches, dinners and even snacks, in the not too distant future, if such a demand rises.

Grace Oh, a 37-year-old Seoul-based interpreter, said she hopes the apartment complex she is set to live in next year will provide meal services for residents. But the upcoming building in central Seoul does not have such a plan for now.

"We are the so-called dual income, no kids couple. As we go to work early in the morning, we don't really have time to make breakfast at home. Once we reside in the apartment, we will ask the community center to consider starting a meal service for residents," she said.

Even if the number of meal-offering apartment buildings goes up, the food on offer will be limited to things that are easy to make and take out. For example, many will likely serve items like sandwiches, scrambled eggs and salads.

In fact, apartment complexes already offer such foods on their menus and it not easy to find traditional Korean food. Traditional Korean fare requires dedicated food processing areas and with associated infrastructure, but these are not permitted by the authorities for various reasons.

The government said it may consider revising the law if there is ample demand in the housing market.

"A revision in the law may allow existing and new apartments to have kitchen areas where a full range of meals can be cooked," Jeon Sang-eok, who is in charge of housing management law at the transport ministry, said.