SEJONG, June 7 (Yonhap) -- South Korea said Thursday it has joined an inter-governmental organization on rail transportation between Europe and Asia, a move that could boost Seoul's ambitious project to link the Trans-Siberian Railway with an inter-Korean rail line.

Officials of the Organization for Cooperation between Railways unanimously approved Seoul's full membership during a ministerial meeting in Kazakhstan earlier in the day, according to the Ministry of Land, Infrastructure and Transport.

The move came as North Korea -- a member of the organization -- did not oppose Seoul's full membership amid a recent thaw in bilateral relations.

Full membership in the organization requires unanimous support from 28 member states that also include China and Russia.

Discussions on the project to connect the Siberian line with those that can operate between the two Koreas has been underway for more than a decade, although no major progress has been made due to geopolitical obstacles, particularly North Korea's nuclear and missile programs.

In April, the leaders of South and North Korea held a summit and agreed, among other things, to efforts to connect and modernize inter-Korean railways and roads as part of broader reconciliation and cooperation programs. 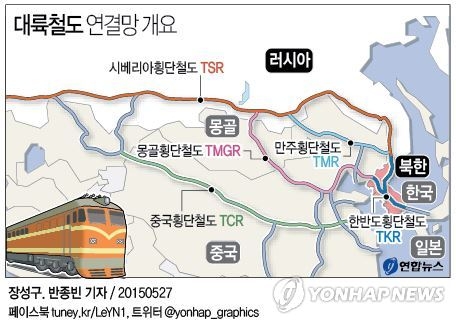