SEOUL/SEJONG, June 7 (Yonhap) -- South Korea on Thursday launched a series of events to promote its food products in the capital city of Vietnam in a bid to stimulate exports to the Southeast Asian country, the agriculture ministry said.

The four-day K-food trade show began with a two-day consultation session for exporters and buyers, organized by the Ministry of Agriculture, Food and Rural Affairs.

The government has been moving to diversify its export market, currently heavily reliant on Japan, China and the United States, it said. Vietnam is South Korea's fifth-largest food export market.

Vietnam's South Korean head coach Park Hang-seo, along with K-pop singer HyunA and boy band Highlight will make an appearance at the opening ceremony slated for Saturday, according to the ministry. 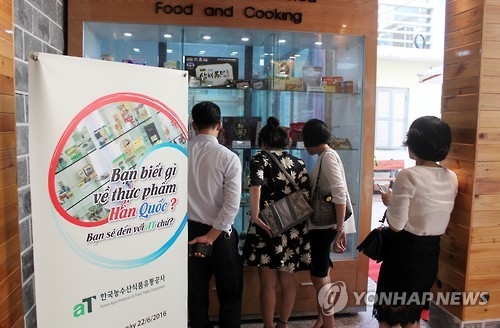