SEOUL, June 8 (Yonhap) -- South Korea kicked off two-day early voting Friday for the June 13 local elections and parliamentary by-elections, which are seen as a referendum on liberal President Moon Jae-in.

Eligible voters can cast ballots at 3,512 polling stations nationwide from 6 a.m. to 6 p.m. until Saturday, according to the National Election Commission (NEC).

A poll released by the NEC showed Thursday that 76.5 percent of those surveyed said this week they will definitely vote in the upcoming elections, up from 70.9 percent recorded two weeks earlier. 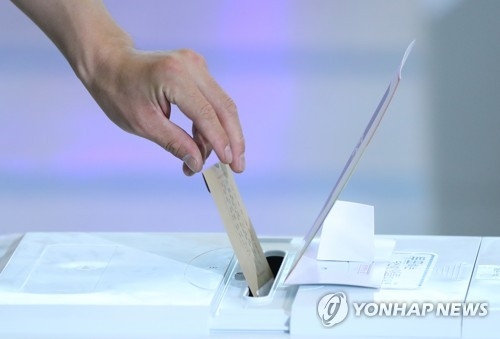 The DP has already basked in a high approval rating on the back of strong public support for President Moon and his drive for inter-Korean rapprochement.

The party is calling for more participation in the early voting partly on concerns that young voters may skip the polls on the assumption that the DP will easily win.

The main opposition Liberty Korea Party (LKP) is still reeling from low public support following last year's ouster of former President Park Geun-hye due to a corruption scandal. It is hoping that conservative voters will come out after keeping a low profile on political issues.

The biggest battleground for the local elections is the capital Seoul, where some 20 percent of the country's population of 52 million resides. The Seoul mayor carries extra weight as it is often deemed a stepping stone to the presidency.

Incumbent Mayor Park Won-soon is far ahead of his rivals with a support rating of 49.3 percent, according to a poll commissioned by three broadcasters. He was followed by Kim Moon-soo of the LKP with 13.6 percent and Ahn Cheol-soo of the minor opposition Bareunmirae Party with 10.7 percent.

Kim and Ahn failed to narrow their differences over a possible merger of their candidacies to compete against Park, the front-runner seeking a third term.

But it is still speculated that they may reach a last-minute agreement. Both sides are demanding that the other party drop their bid to make way for a single candidacy.

During TV debates aired late Thursday, Kim and Ahn lashed out at what they call Park's tepid performance in office for the past seven years.

Park earlier played down the impact of their potential merger of campaigns, saying the move would not appeal to voters. 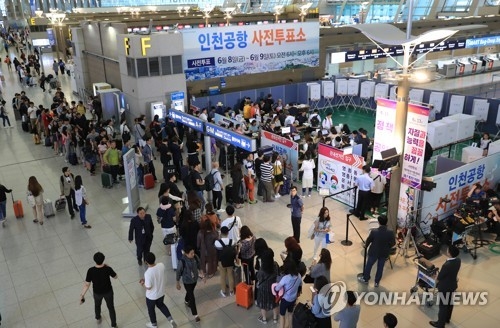