The drill by the North Pacific Coast Guard Forum, which includes South Korea, the United States, Japan, China, Russia and Canada, was based on a scenario of a group of terrorists seizing an international ferry named the Korean Peninsula carrying 100 passengers in waters off the city's Suyeong Bay.

A coast guard team from South Korea, Russia and China rappelled from a helicopter onto the ferry to overpower the terrorists. During the drill, the ferry caught fire due to the hurling of a grenade by a terrorist, and the passengers jumped into waters in back-to-back explosions on the ship before being taken to a helicopter and a high-speed boat. 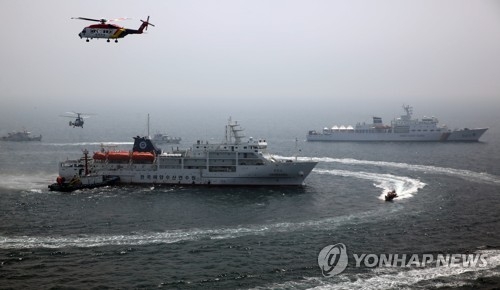 Utilized in Thursday's drill were nine vessels, 11 high-speed boats, five airplanes and a 21-strong coast guard team of three countries. The United States and Canada did not send vessels or airplanes but took part in the drill as observers.

The North Pacific Coast Guard Forum was initiated in 2000 as a venue to foster multilateral cooperation through the sharing of information on matters related to combined operations, exchange of information, illegal drug trafficking, maritime security, fisheries enforcement and illegal migration.

South Korea has hosted this year's joint drill of the forum in Busan since Monday. On Wednesday, the member countries held a seminar to share policies on maritime search and rescue and know-how to cope with natural and man-made disasters in the maritime community.

Park Kyung-min, chief of the Korea Coast Guard, vowed that "South Korea will, through the drill, solidify the cooperative posture among the six coast guard agencies and keep the sea safe in cooperation with them."