As of the end of 2017, 50.2 percent of all government employees were female, up from 49.8 percent a year earlier, according to the Ministry of Personnel Management.

Minister Kim Pan-suk said that the government will soon announce new public personnel management measures in line with the growing role of women in the civil service. 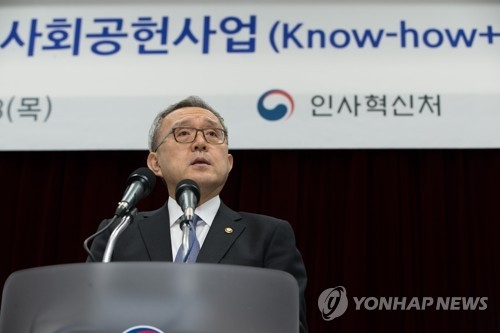 "The fact that the percentage of women among the public servants exceeded 50 percent for the first time will be an important turning point. There remain many tasks ahead, such as the (comparatively small) ratio of women in senior positions and gender imbalances in some work areas," said Kim in a meeting with reporters.

Kim also said his ministry will seek a role in helping North Korea in accordance with the improving inter-Korean relations.

"North Korea is reportedly interested in the development model of Vietnam. In 2008, South Korea helped Vietnam enact its public service law at the request of the Asia Development Bank. North Korea may seek similar help," said the minister.

"We should be ready in case international organizations ask for our help regarding North Korea's personnel management system and law," he said.